Have you read The Bestseller Code*?

The authors, Jodie Archer & Matthew L. Jockers, say that the two bestselling adult books of all time–Fifty Shades of Gray* and The Da Vinci Code*–share a “regular rhythmic beat” that no other books share, at least not as closely.

Whether coincidence or not, don’t you kind of want to know how to create that regular rhythmic beat in your WIP?  I do.  So we’re going to figure out how best to do that today . . . and next week.  This post came out to a little over 3500 words, so I’m going to split it in two.

Archer-Jockers don’t offer a great definition of rhythm, but they do give us a nice visual: 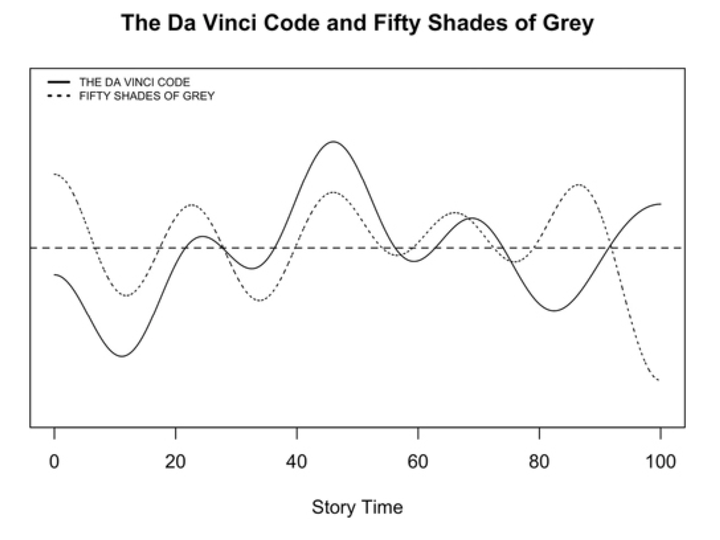 What’s interesting to me is that this graph shows that each story has roughly eight evenly spaced peaks and valleys, which overlaps quite nicely with the theory of sequences. More on sequences below . . .

Other definitions of rhythm:

William Martin, quoting Herbert Spencer, says, “Rhythm results whenever there is a conflict of forces not in equilibrium.” In other words, rhythm results naturally from the disequilibrium between your main character’s goal (including, at different levels, the story, act, sequence, scene, and beat goals) and the obstacles that stand in his way.

OTHER KINDS OF RHYTHM

This post is mainly concerned with rhythm at the sequence level, but before we get into that, let’s get out of the way that “rhythm” can refer to all sorts of other story things as well, including:

E.M. Forster says, “Rhythm is sometimes quite easy. Beethoven’s Fifth Symphony, for instance, starts with the rhythm ‘diddiddy dum,’ which we can all hear and tap to. But the symphony as a whole has also a rhythm–due mainly to the relation between its movements–which some people can hear but no one can tap to.” That first rhythm, in story terms, is the rhythm at the sentence level, the musicality of the language.  We’ll get to this when we get to voice.  Forster’s second rhythm is the rhythm at the plot level, which is what we’re trying to get clear about today.

So, in other words, the rocking from positive to negative and back again happens on a micro basis every couple of pages or so at this level.

Rhythm at the Story/Act level is sometimes called Narrative Pattern.  This is the theory that there are, depending on who you ask, only two or seven or twenty, etc., story patterns. We’ll get to narrative pattern someday, but for those interested now, Archer-Jockers says their story algorithm identified seven plots, and that those seven plots matched most closely the plot patterns outlined in Christopher Booker’s The Seven Basic Plots*.

Rhythm can also refer to Narrative Rhythm, meaning the number of words or pages given to a block of time in the story.  For example, you can pack ten unimportant years of time into ten words, and you can unpack ten super important seconds of time over the course of ten paragraphs or even ten pages.

Karen Pearlman, a film editor, identifies three rhythms in film editing and says they’re cumulative and impossible to separate.  “In most productions, physical, emotional, and event rhythms are all three at work, all the time, to create the movement and energy of the film. The physical moves emotions, the emotional moves events, and the events move visually and aurally [or, in a novel, imaginatively?]. In this way, the rhythm of the film is experienced as a whole, greater than the sum of its parts.”

Novelists and other writers probably have other and more rhythms to work with, as mentioned above, but I think she’s still right in how they build upon each other.

WHY SHOULD WE CARE ABOUT RHYTHM IN PLOTTING?

1. Rhythm induces readers to synchronize their feelings with the character’s.

Mr. Thomas says, “Rhythm is capable of directly inciting feelings, and because it is based in natural human instincts, it induces these feelings effortlessly. Most of us are inclined to accept rhythm’s emotional effects without even thinking about them.”

Ms. Pearlman agrees. “Riding the rise and fall of tension and release when watching a movie, the audience’s body rhythms and the rhythms of the film sync up. The ‘ride,’ rhythmically speaking, is the movement of the film composed in such a way as to influence the viewer’s pulse, breath, and attention.”

Like I said, Ms. Pearlman’s an editor, but we, as writers, can still shape the movement of events, emotions, and the language used to depict action (what she calls images and sound) into synchronization-inducing rhythms.

Albert Zuckerman says, “If your story is one of unrelenting tension, with frightening events in chapter after chapter, then it might make sense to weave between these chapters a secondary plot strand that is lighter in tone and that also contains a bit of comedy.  Just as we can do more running, swimming, push-ups after a bit of rest, your reader will be better primed to absorb the full impact of a powerful scene if you give him a breather between it and your previous knock-down, drag-out episode.”

COOL, SO HOW DO I CREATE RHYTHM?

F.K. Stanzel says, “Narratives with considerable alternation of the basic forms [by which he means “report, commentary, description, scenic presentation interspersed with action report”] and with frequent transitions between narrative situations [by which he means highs and lows, successes and fiascos] have a strongly pronounced rhythm. Narratives based on only one or two basic forms and on a consistently maintained narrative situation, on the other hand, have a relatively weak rhythm.”

Mr. Zuckerman says, “Plotting a popular novel is . . . an exercise in alternations, in laying out somewhat rhythmically ups and downs, scenes in which the protagonist comes out ahead or wins outright, and scenes in which the hero or heroine is battered or decisively beaten.”

So ask yourself, “Looking at your project, do the fortunes of its protagonist have enough ups and downs? These should more or less permeate your entire story,” says Mr. Zuckerman.  “If they do not, then it might be wise to go back to the drawing board and replot your scenes so that they end up with distinct, albeit sometimes subtle, defeats and victories, failures and successes, satisfactions and woes.”

OKAY, BUT MORE SPECIFICALLY, HOW DO I CREATE RHYTHM?

We’ll get to that in Part 2 of this post.  See you next Monday!

If you haven’t already, please subscribe to the newsletter. It’s a monthly-to-quarterly newsletter to share news and free worksheets and whatnot. We’ll send you a 19-page Character Development Workbook just for joining.

*Starred links are Affiliate Links, which means I get a commission if you decide to make a purchase through these links, at no cost to you.  In other words, if you’re thinking of buying copies of these books for your home craft library anyway, buying said copies through these starred links is a no-brainer way to help support this site. And I appreciate it. Thank you!